I would like for you to introduce yourself by telling the readers where you from and what you do.

My name is Kashif Boothe; I’m from London, UK and I am a freelance development assistant within factual and scripted TV and an independent filmmaker.

I attended a sixth form college (which is apart high school education) and studied Media, Film & TV and music production. I studied Film at Roehampton University and graduated in 2013.

What is your profession?

I am a freelance development within factual and scripted TV and an independent filmmaker.

When did you fell in love with art?

I fell in love in with art when I was 13

What made you fall in love with art?

I fell in love in art when I saw how people could relate to what is happening with a painting, a picture or in a movie

Why is art important to you?

Who inspires you as a child and now?

As a child, my Grandmother inspired me and now the people who inspire me are Mara Brock Akil, Kenya Barris, and Issa Rae

How important is art in today’s society?

Art, it is very important in today’s society as it is the main source of expression, if we couldn’t express ourselves what would we do?

Explain to me the absence of art would do to you and society?

If there was an absence of art I wouldn’t know what to do, my life is art, it is what I do every day and I’m not exaggerating, I work in the media industry Monday – Friday and on the weekend I focus on my independent projects. If there weren’t any art in today’s society, there wouldn’t be a platform for people to express themselves or be able to watch TV or play game consoles. If there weren’t art it would have a massive impact on the world we live in today.

How long have you been filming?

I’ve been filming for 6 years 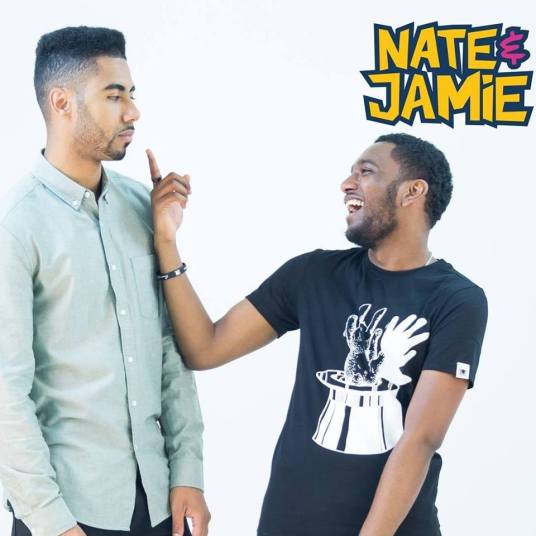 The way I came up with Nate & Jamie was not done in a conventional way. The pilot episode was originally a one-off comedy sketch which was based on a story by Joshua Samuels who plays Jamie in Nate & Jamie. When I released the comedy sketch the reaction was positive and people wanted to see more, I wanted to take advantage of the success and decided to turn it into a web series. The process of writing Nate & Jamie was pretty easy I spent two weeks writing and re-drafting the script. I came up with the idea of the first season in less than a day, once you’ve come up with the idea it’s about filling up the gaps in between the beginning and the end of the story.

How long does it take to for you to complete a script?

It takes me probably 3-4 hours to write a script, depending on how long I want the film or episode of a web series to be and that all depends if I don’t get writer’s block.

Is there a preparation difference between writing a short and web series? If so explain?

For me there isn’t any difference, I usually come up with an idea, I will write a quick summary of the idea on my phone or on a piece of paper. I will then create a step outline, which is an outline of how the story will be told and then I write the script.

A Director is a creative force in a film’s production – visualizing and defining the style and structure of the film, then bringing it to life. I will cast actors, edit the script ( the majority of the time on set) choose shot selection and editing.

How challenging is it to be a director?

What is your view on the filming industry today?

The film industry today is stuck, I think it’s lacking originality, there are too many reboots it’s all about making money and not good films. I think that’s why producers and directors are moving to TV with shows like Empire, Insecure, Game of Thrones and The Walking Dead. The TV industry is taking more risks, showing the diversity and it’s paying off.

What I like about the filming industry are meeting writers, directors, camera crew and actors who have the same passion for filmmaking as you do. What I don’t like about the filming industry is the lack of diversity on and off the screen, it’s been proven with shows like Insecure and Chewing Gum that shows written and produced by black writers/directors are successful because they are authentic. I would like to see an Asian/Latin version of Sex and The City or Friends, there is a huge gap in the market and it is frustrating that film industry hasn’t taken advantage of it.

A production in Hollywood contacts you for one of your scripts. You take a flight to L.A. to meet with the production company. They offer you a six-figure deal which is $200,000 for your work. As part of the deal, you have to give up all rights to the script, and extra incentives. You also lose creator control. Would you take the money or would you negotiate for control including incentives?

I would negotiate for control and incentives as I could not imagine one of my scripts being made and I wasn’t apart of it.

How important is creator control from your opinion?

I think it’s important because you if have a vision you should make sure you execute it. But on the other hand, I think it’s good to collaborate and get someone else’s perspective as it could make the project even better.

There are pros and cons of being an independent filmmaker and an established production. I prefer being an independent filmmaker because I am in control of my projects and do not have to consult any business partners etc. To be an established production would be great, as I would have a budget and the connections to hire a crew, PR and well, known actors.

What is your goal at the end of the day? Where do you see yourself in five years?

My goal is to have an established production company known for creating content that informs, educates, inspires and entertains its audience.

In five years I see myself having produced a few indie feature films, which have got into major film festivals, my production is an established brand and I am in the beginning stages of adapting one of my web series’ for a TV network.

So, what are you doing now, and what can we expect from you that we should be on the lookout?

Where can readers find your production and work?

Readers can find my work at youtube.com/c/KashifBoothe